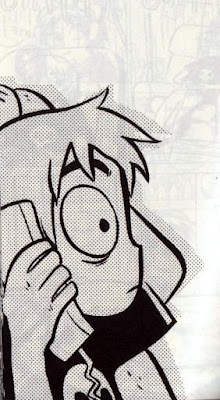 Scott Pilgrim now seems to have a UK publisher. On the plus-side it's a lot easier to get your hands on the books now, but on the down-side... Well, the ink quality is poor, things are pretty grey in places. And the paper quality is even worse.

Lee O'Malley makes great use of bold blacks and whites, for example one two page spread in this volume that consists of Scott on one page and a lone speech bubble on the other. It should be a strong effect, but the pages are like tracing paper - you can see through not just to what's on the other side, but what's on the page beyond that as well, and what should be extremely simple and bold instead looks a huge mess, with all these different (and quite irrelevant) images crowding into the (supposedly) blank space. On top of that, the book's taller than the Oni Press edition, but the same width, which is really weird. Has the artwork been stretched or cropped? Neither seems desirable.

And I wouldn't mind so much if the reduced quality translated to a reduced price. But comparing these pages to a cheaper volume of manga, the manga wins hands down. Looking at it cynically, we have a major movie coming out, lots of people will obviously want to read all these books, and the publisher (someone called '4th Estate' who seem to be owned by HarperCollins) have released a low quality book for a high price. I'm getting a definite whiff of profit margins trumping artistic integrity.

As for the actual content, Lee O'Malley continues his superlative dialogue, characterisation and artwork. The premise, which felt a little incongruous last time, is even starting to grow on me now, and seems to be better integrated with the more everyday parts of the story. It's just a shame that UK readers are getting such a shoddy edition. To be frank, if I can't get my hands on the Oni Press editions, I might not bother with the rest of the series.
Posted by Pacian at 7:20 pm

Again. :-( When will they learn that quality and range is more important than £££?

It's cropped - you can tell because some of the dialogue is chopped off in places!

4th Estate clearly has absolutely no idea how to print a comic (note also they've printed the colour pages of book 4 in black and white) and after slogging through their disasterous edition of book 2 (which I inadvertently bought on Amazon) I'm not going to bother buying the rest, will just borrow my friend's Oni Press editions instead. Said editions now being a nightmare to track down thanks to 4th Estate flooding the marketplace with these useless doppelgangers.

By the way, diddums, quality and range isn't *more* important than £££. It's of *equal* importance, indeed in the long term one is conditional upon the other. Certainly if 4th Estate had bothered printing a decent facsimile of the Oni Press books (or even improved upon them slightly!) they would be getting rather more of my cash than the small amount I regret wasting on just the one book...