Apologies if I am slack on the posting and commenting at the moment, but I am experiencing something of a low ebb.

In the meantime, read Beaver and Steve.
Posted by Pacian at 6:50 pm 3 comments: 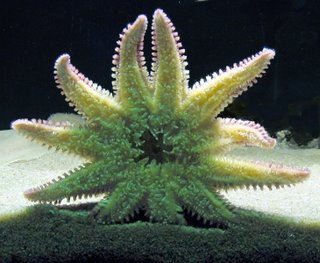 It's my birthday!
Happy birthday! (To me!)
(This is my brithday song.)
I was a bit grumpy when I woke up today, but I got some nice presents, including, from my lovely mother, a whopping great big Atlas of the Universe - a dense tome of knowledge and imagery amalgamated by the sizeable brain of living legend Sir Patrick Moore. My favourite political dissident bought me the first season of American Dad, which I haven't seen, and which fleshes out the meagre selection of American animation in my DVD collection. Bringer-of-Joy-in-Chief Emily, occasional commenter, also got me the lovely QI book. I love that show, not to mention Stephen Fry. Other dividends included a little Patrick Star beanie and some humorous cards that did split my sides asunder. Seriously.

Mood improved, my reward for surviving for twenty-three orbits of the blue orb is to lock myself away and write feverishly, while my conscience cracks its whip low over my head. You lucky folks may, instead, gaze upon this lovely Cassini portrait of Saturn: 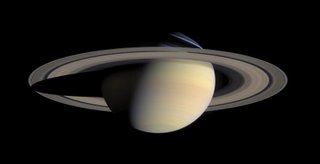 Labels: Me Me Me, Saturn and its Moons

Via Zhoen of One Word.

You can only answer one word. No explanations.
1. Yourself
sucks
2. Your spouse
none
3. Your hair
shit
4. Your mother
nice
5. Your Father
no
6. Your Favorite Item
invisibility
7. Your dream last night:
zombies
8. Your Favourite drink
water
9. Your Dream Car
tachikoma
10. The room you are in
bedroom
11. Your Ex
butterfly
12. Your fear
worthlessness
13. What you want to be in 10 years
worthy
14. Who you hung out with last night
Lovecraft.
15. What You're Not
fearless
16. Muffins
scroodledoo
17: One of Your Wish List Items
confidence
18: Time
inexorable
19. The Last Thing You Did
sit
20. What You Are Wearing
clothes
21. Your Favorite Weather
rain
22. Your Favorite Book
unanswerable
23. The Last Thing You Ate
cereal
24. Your Life
pending
25. Your Mood
melancholy
26. Your best friend
who
27. What you're thinking about right now
meme
28. Your car
bus
29. What you are doing at the moment
procrastinating
30. Your summer
graduated
31. Your relationship status
failed
32. What is on your tv
darkness
33. What is the weather like
chilly
34. When is the last time you laughed
forgot
Posted by Pacian at 1:47 pm 10 comments:

NYT: Iraqis too Stupid and Violent for America's Valiant Atempt to Instill Democracy 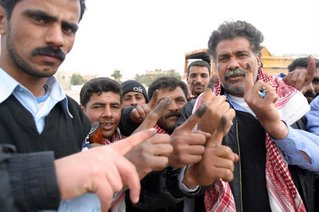 There's an NYT article published on 12th Nov with the ominous heading of "Stability vs. Democracy". lenin-with-a-little-l does a good job of dissecting the underlying creepiness here. It seems that after the mid-terms there's a new impetus towards criticism of the war in Iraq, but no new understanding of how to do so. Based on this article and a couple of questions by American reporters heard elsewhere, I am going to jump to the conclusion that the US media is now trying to oppose the occupation of Iraq in exactly the same racist, imperialistic and jingoistic terms that it once supported it - probably the only terms it knows.

What I'd like to discuss about this article is the way it casually rewrites history, starting with its header. The article implies explicitly states that, after Saddam was deposed, America immediately set about building a nice shiny democracy, but now, in the face of all those disgruntled natives, they may have to give up and choose a stable country over a free one. For the moment, let's assume that an undemocratic Iraq would be more stable, and would not encourage even more people to pick up arms. This is what America originally wanted.

The elections of June 2004 were originally the time at which America was going to install an unelected 'provisional government' which would rule the country until it was deemed fit for democracy. As the situation in the country worsened, the number of years that the provisional government was expected to rule for was extended. Some powerful Americans started to wonder if perhaps they should just leave it that way, and never hold elections. However, the Americans in Iraq were crestfallen to discover that they were not the ones in charge of the Iraqi people. By and large it was Ayatollah Ali Sistani. And this religious nutcase, from the intrisically-incompatible-with-democracy religion of Islam, was adamant that the ones in charge of the Iraqi people should be the Iraqi people themselves. These Iraqis sure do have a different set of cultural standards to us, don't they! No wonder it was all doomed to failure!

Thanks to the Ayatollah's sway over the Shia people in Iraq and his dogged determination that Iraq should be a democracy, in June 2004, instead of installing an unelected government, Iraq held democratic elections. The US acted like this was what they had planned all along, and most of the media happily reported it this way.

Now that things haven't worked out so well, coincidentally after little matters like America policing the country with guided missiles, we are now being presented with this idea as if it were an uncomfortable but possibly necessary solution to a difficult problem, rather than what they actually wanted to do all along.

Dedicated to our American Betters

Sometimes I get the impression that apparently cash-saving DVD collections are just dumping grounds for discs that can’t be sold individually.* Take this three disc collection of Mad Max films, that just can’t seem to get any cheaper. On the second price drop, I had to pick it up.

But the movies are all in their Americanised Americanized versions for some reason. Hopefully, as far as I can tell, the most damage done to the actual movies is that Mad Max 2 is now ‘THE ROAD WARRIOR’ complete with swooshing metallic sound effect. When it comes to the first film, the movie seems fine, but there is something very unusual about the default settings of the disc. I post the following screen cap without further comment. 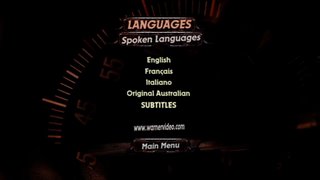 *EDIT: Actually, on further investigation, it seems the movies are still in these versions when you buy the DVDs separately.
Posted by Pacian at 12:49 pm 4 comments:

He Was Only Tiny, Though

Celebrating its tenth anniversary, it seems that the Mars Global Surveyor may have hit a snag. Ten years is a pretty good running in my book, but I really hope they sort it out. When it comes to robots on Mars, the more the merrier, I say.

Writing about this in the Planetary Society Blog, Emily Lakdawalla notes that this is actually a strange anniversary to celebrate for MGS. Tenth anniversary, meaning ten complete orbits of the Earth, while MGS orbits a certain other planet. As an aside, she links to this page, explaining the Martian calendar, such as it is.

Solar longitude, eh? Nicely heliocentric. Time to bring our own calendar into the post-Copernican age perhaps? 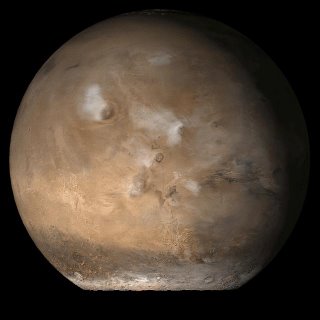 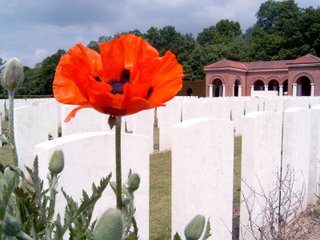 You were between the devil and the deep blue sea. If you go forward, you'll likely be shot, if you go back you'll be court martialled and shot, so what the hell do you do? What can you do? You just go forward, because that's the only bloke you can take your knife in, that's the bloke you're facing.

We were sent in to High Wood in broad daylight in the face of heavy machine-gun fire and shell fire, and everywhere there was dead bodies all over the place where previous battalions and regiments had taken part in their previous attacks. We went in there and C Company got a terrible bashing there. It was criminal to send men in broad daylight, into machine-gun fire, without any cover of any sort whatsoever. There was no need for it; they could have hung on and made an attack on the flanks somewhere or other, but we had to carry out our orders.

But there was one particular place just before we got to High Wood which was a crossroads, and it was really hell there, they shelled it like anything, you couldn't get past it, it was impossible. There were men everywhere, heaps of men, not one or two men, but heaps of men everywhere, all dead. Then afterwards, when our battle was all over, after our attack on High Wood, there was other battalions went up and they got the same! They went on and on. They just seemed to be pushing men in to be killed and no reason. There didn't seem to be any reason. They couldn't possibly take the position, not on a frontal attack. Not at High Wood.

Most of the chaps, actually, they were afraid to go in because they knew it was death. Before we went in, we knew what would happen, some of the blokes that had survived from previous attacks knew what they'd been through. It was hell; it was impossible, utterly impossible. The only possible way to take High Wood was if the Germans ran short of ammunition, they might be able to take it then. They couldn't take it against machine-guns, just ridiculous. It was absolute slaughter. We always blamed the people above. We had a saying in the Army, 'The higher, the fewer.' They meant the higher the rank, the fewer the brains.

There are some who feel like that the conditions are such that they can attack us there. My answer is bring them on.

Sam and Max are back! 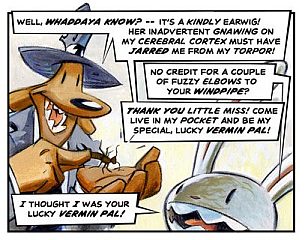 When I was a kid, I loved The Adventures of Sam & Max: Freelance Police beyond words. Of course, the cartoon show was only the tip of an iceberg comprising indie comics and a Lucasarts adventure game. However, the game is difficult to find in the UK, and the complete collection of their comics is now fetching 175 quid in the Amazon marketplace. What joy, then, to find that the much hoped-for Sam and Max sequel is finally abroad, and creator Steve Purcell is (very slowly) posting new comics to the web. Click the image above to see, or click here if moving your mouse that distance is too much effort.
Posted by Pacian at 2:54 pm 2 comments:

Whenever you're looking for western comics that aren't about superheroes or gangsters, and things seem their bleakest... there is Oni Press, arriving on the scene in its reassuringly normal car, with no rocket boosters or bulletproof windows, full of flawed human beings, imaginary horses, strange monsters and pirates!
Posted by Pacian at 9:24 am 3 comments: