To the Mun and Back, with a Passenger 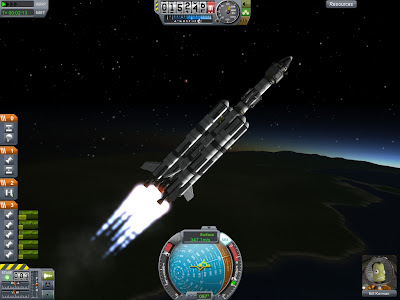 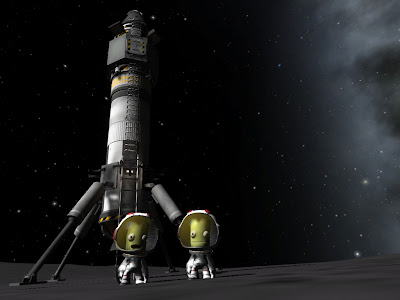 After a number of failed experiments, and watching a few videos by Scott Manley (hallowed be his name), I came up with the Space Cheetah 1: a much more efficient rocket, more than capable of landing on the Mun and returning to Kerbin.

Having to land near Jebediah’s stranded lander did make things a little trickier, but I managed to touch down within 14km, and Jedediah covered the distance with his jet pack. And so the two brave heroes boarded the rocket for the journey home, blissfully unaware of its lethal design flaw.
Posted by Pacian at 9:02 pm No comments:

Not Quite to the Mun and Back 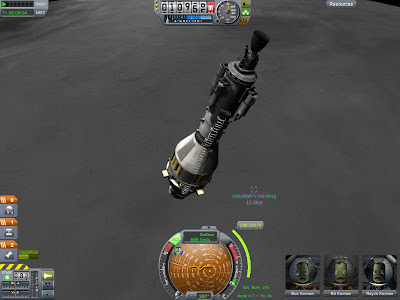 After the Space Cat 3 left Jebediah Kerman stranded on the Mun, I tried coming up with a beefier rocket to better make the trip there and back. It soon became clear, however, that I was just scaling everything up, creating bigger rockets that were every bit as inefficient as before.

Here three brave kerbonauts managed to pass over Jebediah at an altitude of a few kilometres, a reckless act that left them with barely enough fuel to get back to Kerbin.
Posted by Pacian at 9:19 am No comments:

To the Mun and… Back? 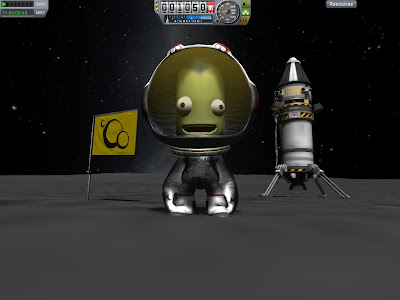 Having cut my teeth on Orbiter back in the day, the friendlier and more feature-rich Kerbal Space Program is clearly right up my alley. After messing about a bit in Kerbin orbit, my first proper attempt to reach its closest moon (“Mun”) resulted in a safe touchdown of the Space Cat 3’s landing stage, allowing Jebediah Kerman to plant a flag on a brave new world.

Of course, I did almost run out of fuel during the landing, leaving no chance of a return journey, but that just meant I’d won the opportunity to craft a rescue mission…
Posted by Pacian at 7:45 pm No comments: 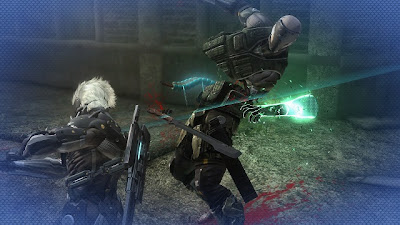 On the subject of video games that aren't ashamed to be video games, the superbly titled Metal Gear Rising: Revengeance is a prime example. Living by the rule of cool, the cyberpunk themes are plundered for diverse enemies that blur the line between the biological and the technological - in the process covering more interesting topics than the "cyborg modification is bad - yes/no/maybe" of certain other games.

Revengeance doesn't take itself seriously. It's happy to use the language of video games and it doesn't mind looking silly from time to time if it benefits the overall experience. The gameplay is frantic and fun and, on normal difficulty, I thought a little easy... At least until I reached the final boss battle, which starts out with a giant spider mech trying to stamp on you and only gets more extreme and challenging from there. I emerged from this final onslaught a little like its hero: worn out and pushed to the edge, but mostly just satisfied to have splatted a bad dude and a few hundred of his mooks.
Posted by Pacian at 10:15 pm No comments: