On the Important of Testing 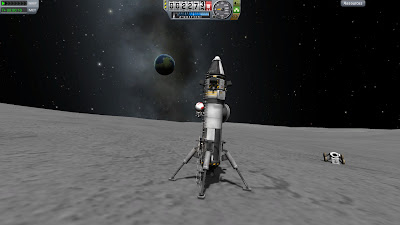 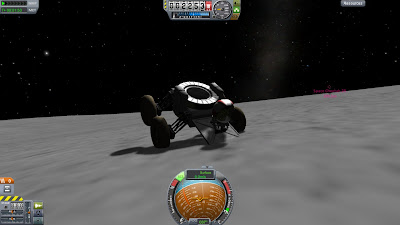 Fancying a carefree drive across a cratered landscape, I tried sticking a rover on the side of the Space Cheetah 2 (basically the Space Cheetah 1A with some solid rocket boosters to help get it into orbit with more fuel remaining).

I knew the rocket would be a bastard to control with this weight pulling it off-centre, but only when I got it to the Mun did I discover that the rover didn’t stand up straight and was useless.
Posted by Pacian at 8:46 pm 2 comments:

To Duna and… ah, forget it 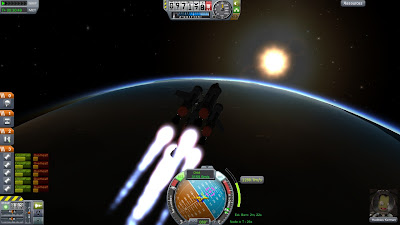 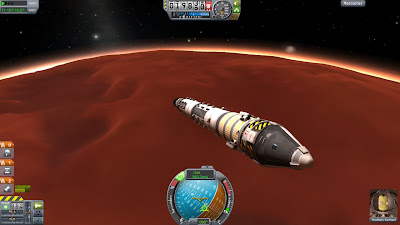 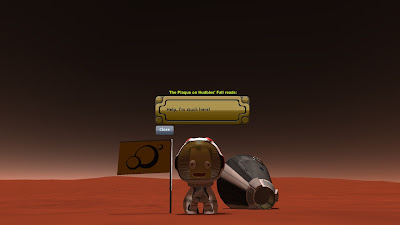 As an exercise, I tried designing a rocket that used nuclear engines and getting it to Kerbin’s red neighbour, Duna. After a slow and awkward transfer orbit, brave Hudbles Kerman parachuted the crew capsule down to the surface.

Given that it's going to be a while before I manage to come up with a rocket that can make the round trip, I probably should have landed an automated rover instead...
Posted by Pacian at 7:16 pm No comments:

To Minmus and Back 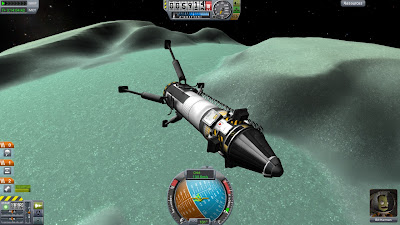 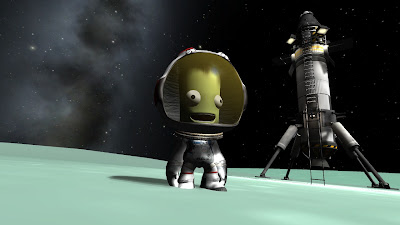 The obvious next step was to land on Kerbin’s more distant (and inclined) moon of Minmus. Space Cheetah 1 was more than up for the job, but I decided to use the slightly refined Space Cheetah 1A, with the troublesome mk1 lander can removed and some solar panels added to recharge the batteries when I forget to turn the lights off.

After his ordeal on the Mun, Jebediah Kerman understandably sat this one out, his rescuer Bill Kerman (no relation?) instead being the first kerbal to plant a flag on Minmus.

When Scott Manley claimed this was actually an easier trip than a voyage to the Mun, I didn’t believe him - but Minmus’ low gravity really does make landing a lot easier and safer.
Posted by Pacian at 9:51 pm 2 comments: 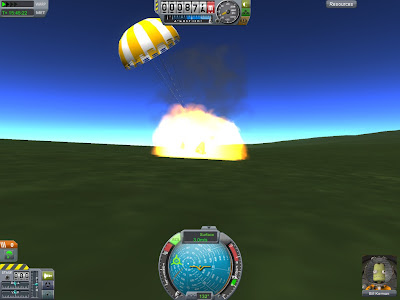 It was only in the last moments of my seemingly successful rescue mission to the Mun, that I discovered just how unwise it was to place a mk1 lander can at the bottom of my final stage – a capsule too weak to withstand even a parachute-assisted landing.

In one (alternate) reality, Jebediah Kerman bravely travels to Kerbin’s closest moon, lands with his last sliver of fuel, waits there for 12 days (during which time about half a dozen Kerbals are killed testing various rockets intended to rescue him). Finally, a sleek new rocket lands nearby, taking him all the way back to Kerbin, through its atmosphere and then gently down to the ground suspended from a parachute. But not gently enough to stop his half of the dual capsule from crumpling up like tinfoil and crushing him to death. 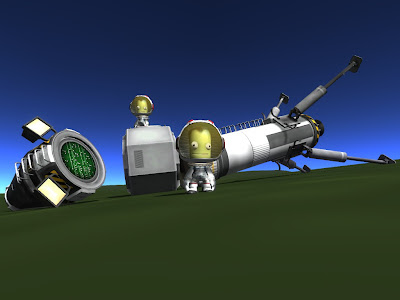 Fortunately at this point I had finally learned to quick-save, and in the real (albeit later) timeline, the Space Cheetah 1 does not separate its final stage, coming down to land with a combination of its parachute and the last reserves of its plentiful fuel. It’s still a bumpy landing, but at least both kerbonauts survive.
Posted by Pacian at 7:24 pm 1 comment: