"At least the fish will be my friends."


The year is 1964, and CIA infiltrator Naked Snake has been sent into the Russian wilderness to extract a defecting scientist. When Snake is betrayed by his mentor, "the Boss", and her elite Cobra Unit, he finds the US threatening him with execution, while the Soviet Union teeters on the brink of nuclear war.

If Metal Gear Solid 2 saw the stealth component of the series properly mature (bearing in mind that the first game in the series was released at about the same time as Thief: The Dark Project), Metal Gear Solid 3 is where this gameplay truly comes into its own. The radar is de-emphasised in favour of proper control over the camera. Camouflage, silencers that degrade over time and a made-up martial art called CQC are thrown into the mix. Things work differently enough from the previous two games that I pretty much had to learn the rules all over again, but, as always, while things may not be very realistic, they are consistent, entertaining and open to possibilities.

As you collect equipment, the number of different ways you have to get through each area will increase dramatically. You can avoid, kill, tranquillize and knock out enemies, interrogate them, jam their radios, distract them, throw venomous snakes at them... And there are a lot of areas to get through. Sneaking is now what you'll spend the vast majority of the game doing: through numerous large, open environments. This game dwarfs its predecessors, while still being packed full of little details and taking you through an absurdly wide variety of terrain types.

In addition to the refined gameplay, Metal Gear Solid 3 also tightens up the storytelling. Yes, there are still plenty of lengthy cut scenes - but they're considerably more focused, and with a lot less bald exposition. Nowhere is this more apparent than the boss fights with the various members of the Cobra Unit, who are left intriguingly mysterious - while bosses of previous games in the series usually poured their hearts out in lengthy, demystifying monologues. Elsewhere there's more of an emphasis on action, humour and actually getting to the point.

The cartoon-ish, sometimes supernatural characters are always interesting and frequently likeable. Ocelot, for example, who had been becoming more and more of a cackling, moustache-twirling villain, is here an ambiguous youth with conflicting ideals of honour and loyalty. The Boss is an awesome and sympathetic antagonist, making you hotly anticipate the final showdown, even as you understand Snake's reluctance to fight her. Snake himself is equal parts bad-ass super soldier and ignorant comic relief. And for all that many games may moralise about the ethics of war, it's difficult to imagine a more organic incentive not to kill your opponents than the creepy and blackly comic boss fight/puzzle that pits you against "spirit medium soldier" the Sorrow.

In one word: I found this game fun. The straightforward but flexible gameplay, the outrageous story, the unforgettable characters and their idiosyncratic boss fights, the explosive finale - everything adds up to an enjoyable and surprisingly unique whole. 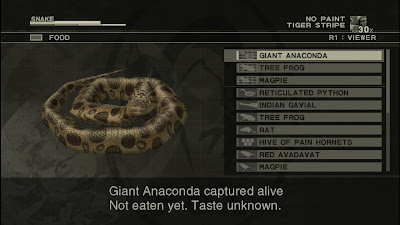 Posted by Pacian at 8:03 pm No comments: