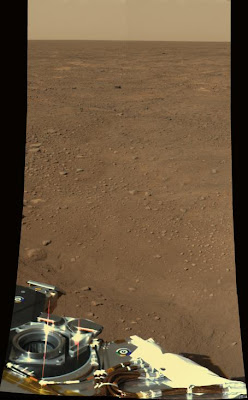 Image source with more information
Credit: NASA/JPL-Caltech/
University of Arizona/Texas A&M University
I always like an image from space that includes a part of the spacecraft. It gives a great sense of immediacy, of presence. Hence the image above, from Phoenix.

Phoenix has been wiggling its arm, looking around, and shining a laser at the sky. It's all fun and games when you're a robot on Mars - until the ice begins to encroach, at least.
Posted by Pacian at 9:32 pm 2 comments:

In space, no-one can hear you swear incoherently.

For the TIGSource Procedural Generation Competition, it's...

You never know what you will find in space! It is a big place! The amazing stories will amaze you!" 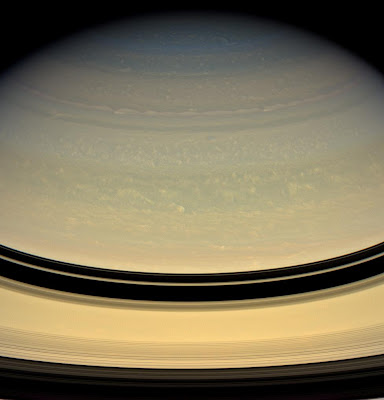 Image source with more information
Credit: NASA/JPL/Space Science Institute
This new(ish) Cassini image, intended to illustrate Saturn's cloudtops, demonstrates just how unequivocally not-blue the northern hemisphere is becoming. It's quite a shame, I think, to see the planet lose its colour. Still, the southern hemisphere will presumably be turning blue once its own winter sets in. The Saturnian year is only thirty times longer than ours, so it can't be long to wait...
Posted by Pacian at 11:48 am 1 comment:

Image source with larger version
Credit: NASA/JPL-Caltech/University of Arizona
Someone who is feeling very healthy this (Earthly) morning: NASA's Phoenix, successfully landed on the Martian arctic. No ice visible yet: but that's expected to change over the next three months, culminating ultimately in the craft failing due to the intense cold, half-buried beneath perhaps a metre of carbon dioxide ice. 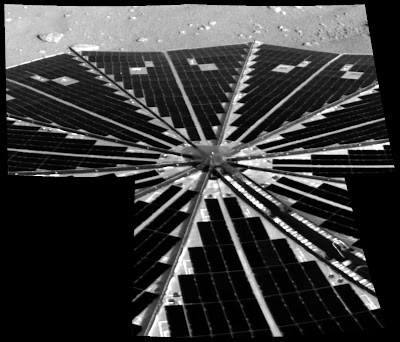 Image source with more information
Credit: NASA/JPL-Caltech/University of Arizona
The operational limit on the Mars Rovers, you may recall, was anticipated to be when their solar panels became completely covered in dust - an event that ultimately never occurred due to frequent gusts of wind. Phoenix is a stationary lander, but its own solar panels are pretty nifty: fan-like things that only gracefully unfurled once the dust thrown up during landing had settled. 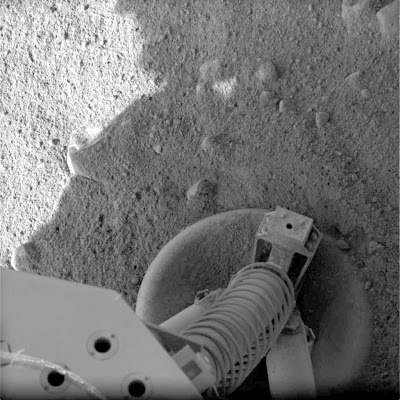 Image source with more information
Credit: NASA/JPL-Caltech/University of Arizona
You may have noticed that Phoenix was pretty quick with the colour images compared to many missions. This is a good sign, but also a bit cheeky. Cheeky because these are 'approximate' colour images. But a good sign, I think, because rushing out some less-than-faithful colour images early shows that the folks behind Phoenix have learnt from the good example of Cassini (and the not so good example of a few other space missions) that it's important to capture the public's interest with striking imagery. Although more scientifically useful data is what will ultimately expand our knowledge (and awe) of the Solar System, it's the way these robots lend us the ability to vicariously experience its sights that makes us so eager to send them out in the first place.

The next big news from Phoenix will be once it has tried sampling the surrounding ice and permafrost, unlocking secrets about the history and habitability of the red planet.
Posted by Pacian at 10:38 am 5 comments: 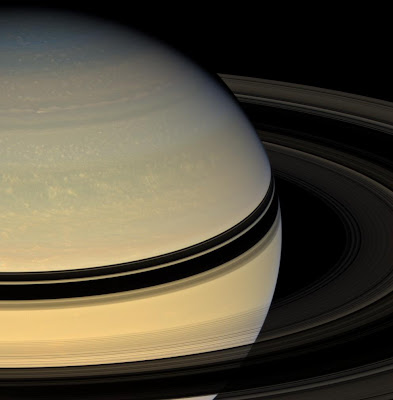 Image source with more information
Credit: NASA/JPL/Space Science Institute
As the ringed planet's northern hemisphere enters spring, it becomes increasingly clear that its former blue tinge (see this image, for example), was the result of some winter process.

The blue top to the planet was a bit of a surprise when Cassini first arrived. No previous probe had observed this effect, and since it is further from the sun than the Earth, Saturn's winter hemisphere is always aimed away from our observatories on the ground, and concealed behind the rings.
Posted by Pacian at 6:08 pm 1 comment:

I've been in a reviewing kind of mood lately, so I finally made use of my account at the Interactive Fiction Database to post reviews of a couple of games: Kathleen M. Fischer's Masquerade and an adaptation of Metroid.
Posted by Pacian at 6:07 pm No comments:

I am not my DNA

I have to breathe a sigh of relief that religious distaste for mixing human DNA and animal cells has failed to result in a ban on promising medical research - by a huge margin of votes.

Lots of pompous orators have been keen to go on about how this is 'plainly immoral', 'tampering with life' and 'Frankenstein science'. Fortunately, it seems that our MPs understand that mixing unfeeling chemicals and cell structures in a petri dish hurts no-one (except vein-popping anthropocentrists) and may potentially ease the suffering of living, breathing human beings.
Posted by Pacian at 7:31 pm 4 comments: 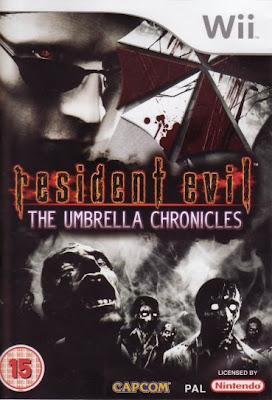 It perhaps indicates that I've reached that dreaded point in any gamer's life when you realise that it's taking you months to complete lengthy games, but I've devoted a lot of my Wii time to Resident Evil: The Umbrella Chronicles this past month precisely because I know that it's easy to pick up and put down. This is a game divided into discrete, bite-size, but inter-related chapters - each of which, while often nicely challenging, can typically be completed in twenty or thirty minutes. Compared to the main line of Resident Evil games – exploration-based with an emphasis on the conservation of ammunition, full of tough boss fights and with save points moderately spaced – this all-guns blazing rail shooter is definitely Resident Evil: The Casual Game. Not that this is a bad thing.

As the title suggests, Umbrella Chronicles spans the events before Resident Evil 4, detailing the rise and fall of the Umbrella corporation from the first grisly events in the Raccoon City forests to its last desperate gambit. Along the way we retread, in rail shooter format, the events of Resident Evil 0, Resident Evil and Resident Evil 3, before unveiling the previously unrevealed swansong of Umbrella, deep in the frozen wastes of Siberia. Completing these chapters also unlocks a number of side-misions, filling in the stories of secondary characters, with an especial focus on unflappable, black-clad Albert Wesker.

Gameplay in Umbrella Chronicles is, on the face of it, very simple. The wii remote acts as a pointer for a set of crosshairs and pulling the trigger-like B button fires your character's gun. The screen takes a first person view, creeping carefully through claustrophobic corridors and devastated streets. Perhaps because this movement is largely out of your control, Umbrella Chronicles does a better job of creating a sense of POV than most first person shooters. At times the characters do seem to be a bit dense in terms of when they choose to look at obvious threats, but typically there's a nice pace to things, as the view sweeps around fearfully, with little clue as to when danger will strike.

An additional layer of complexity is added in the form of special weapons with limited ammunition, and difficult-to-perform critical hits that can allow you to defeat dangerous or plentiful foes with your infinite ammo handgun. There's also a fair bit of button bashing and wii-mote waving to avoid attacks during boss fights and cut scenes; while quickly shaking the wii-mote after a zombie latches onto you will cause your character to pull off a stylish counter-attack. Some of the characters seem to just perform the same boring punch, but Rebecca uses a grenade, Jill tasers and kicks (while shouting "Take that! Ha!" a line I must have heard about a hundred times already), while Wesker and Hunk perform their trademark 'thrust punch' (think The Matrix) and 'neck snap' (a move as balletic as it is brutal) respectively. It's an interesting mechanic in that it shows how a player who is doing badly can both be leant a hand by a game (when it's been a bad day for aiming, I've counter-attacked my way through whole hoards of zombies) and even be given a conciliatory reward in the form of a neat little cut scene (and catchy exclamation - "Take that! Ha!").

As a digest of the story so far (RE4 and RE: Code Veronica notwithstanding), Umbrella Chronicles naturally seems like a good stepping-on point for those unfamiliar with the series, while by fleshing out some of the events taking place in the shadows, there's also plenty here for die-hard fans as well. Similarly, the system of ranks and rewards means that playing for fun, or playing to obsessively hone your skills, are both equally valid approaches to the game. Above all, though, owning Umbrella Chronicles means I can always spend twenty minutes killing zombies with some of my favourite video game characters. Simple, undemanding, engaging, and above all: fun.
Posted by Pacian at 11:11 am 3 comments: 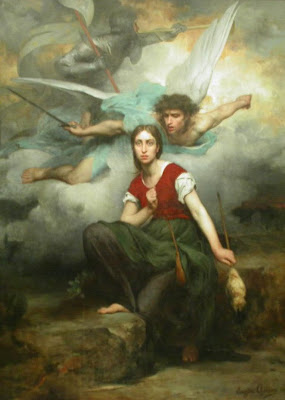 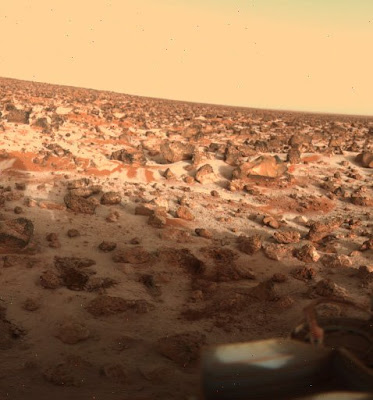 Image source with more information
Credit: NASA-JPL
Eleven days until Phoenix touches down. I'm kind of hoping for a significantly different view of Mars from anything we've yet seen from the ground. Phoenix will be landing at about 68 degrees north, while Viking 2, which provided the image above, experienced the most polar conditions of any (surviving) lander so far, at a relatively balmy 48 degrees north. The white-ish parts of this image are a thin layer of water frost.

And no, it's not just you. Viking 2 landed on a rock, and as such was at a funny angle. Not something that rovers have to worry about, but a big concern among Phoenix's fretful parents, I'm sure.
Posted by Pacian at 8:47 pm 2 comments:

This is what's currently eating up my spare time: my entry for the latest TIGSource competition. It's a genre-defying interactive experience that will push the boundaries of the artform into uncharted waters and punch the sharks of apathy on the nose with hands soaked in fish-blood.

Or perhaps it's just a load of rectangles shooting little squares at one another and changing shape and colour while randomly assembled, barely coherent messages appear at the top of the screen. It is surely a debate that will only be decided by posterity, long after we are all gone.
Posted by Pacian at 11:04 am 4 comments:

All day I've been thinking about this little idea I've had for the latest TIGSource competition. I've already implemented the basic engine. Watch this space...

Hopefully it's a good sign that this thing keeps making me laugh.
Posted by Pacian at 9:40 pm 1 comment:

Or, more accurately, it now has rudimentary, slightly quirky AI. That's my bank holiday monday morning out of the way.

TIGSource are holding yet another competition. No idea if I'll even think about participating, but it is very, very tempting...
Posted by Pacian at 2:22 pm 4 comments:

Since a couple of people have picked up on this now, it might be time to provide an update on Blood from Clockwork Hearts. I have plenty of distractions, so progress is slow, however I'm hoping to keep the game relatively simple, so those two factors may cancel out - you never know. ;-)

Clockwork Hearts is going to be a turn-based strategy game with light RPG elements, set in a fantasy world with Napoleonic-era trappings. Much of the basic engine is done, save for the AI and the event scripting (which are also arguably the toughest parts), so, well... we'll see, won't we?

Graphics modified from RLTiles.
Posted by Pacian at 3:43 pm 2 comments: