Actually, there's something unseemly about dumping a load of images on a Blogger blog, so I'm going to post my failures at isuckatmetalslug.tumblr.com

Tumblr also lets me easily queue my failures up to post over the oncoming days and it doesn't compress the crap out of the screenshots (which are admittedly from a port that distorts the game's graphics anyway...)

I'll probably add a little post here if I manage to make any significant progress. Like it would be nice to make it to the mission 2 boss one day. :-/
Posted by Pacian at 12:48 am No comments:

Credit where credit's due. 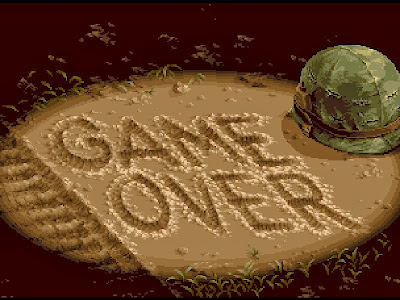 The third instalment in SNK's classic run 'n' gun series Metal Slug is now available on Steam. It's perhaps best described as a "passable" port - it works for most people, stutters very occasionally (for me, more frequently for others) and displays some of the best pixel art of all time at an almost-but-not-quite-right resolution.

If you can forgive those faults, it's still a delightfully exaggerated bunch of explosive madness. And when I'm not working on my current project (which has hopefully passed the point where I'd be prepared to give up before finishing it), I'm currently seeing how far I can get into the game on a single credit (medium difficulty). The answer is probably not far, but I'm going to post my progress here until I give up.
Posted by Pacian at 4:22 pm No comments: