Played it: Zone of the Enders: The Second Runner (HD Edition) 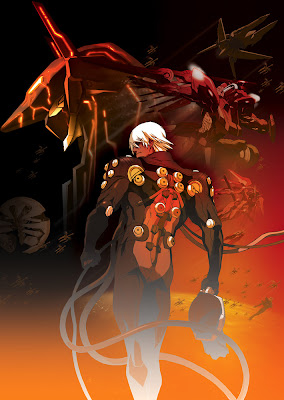 The thing I liked best about the first Zone of the Enders was the cool overworld map, representing a space colony orbiting Jupiter - from which you could descend to more specific arenas full of enemies to be confronted or avoided. The 2nd Runner opts, instead, for a linear progression of levels, some of which allow exploration, but many of which are frantic set pieces.

In every other respect, however, this is a vast improvement on the original: the gameplay requires strategy; the different weapons are all useful in their own ways; the characters are more interesting (even the slightly annoying main character of the first game reappears as a more mature ally); the settings are more varied – and so are the challenges.

In the first game I often wasn’t sure exactly why I failed or succeeded. In The 2nd Runner, it was almost always clear that I failed because I sucked at whatever I was supposed to be doing – whether that was being ganged up on by mooks, learning the rapidly changing attacks of a boss, negotiating a minefield, shooting down giant spaceships or escorting a character who makes Ashley Graham seem like Liberty Prime – and I succeeded by practicing, paying attention and experimenting with different strategies.

In summary, this was probably the most fun I had swearing at my TV so far this year.
Posted by Pacian at 11:58 pm No comments: 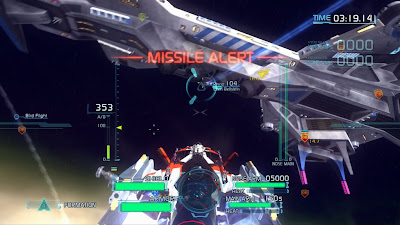 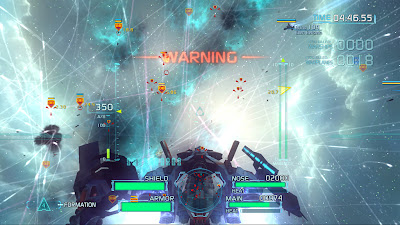 After the first mission of this space combat game, we’re treated to the funeral of a character who died during the opening cinematic. Aware that players were given no reason to care about this poor soul, the script makes sure to tell us that “he was a kind man, loved by everyone”. This represents the story elements of Project Sylpheed in a nutshell: events that are on paper dramatic and in execution ham-fisted and artless.

Fortunately, the cut scenes are brief and usually more interested in giving us close-ups of the spaceships that’ll be exploding than providing insights into the inner lives of the characters. The story serves its purpose in terms of justifying why our nimble starfighter should be blowing up red ships and not blue ones, and that is what we will spend by far most of our time doing.

Speaking of time, let’s get this out of the way: each part of every stage has an arbitrary time limit, rarely justified and frequently contradicted. Failing the mission because you didn't shoot down that last lousy fighter in time is pretty frustrating - especially when all that would have happened had you succeeded is the timer would have reset and a bunch more enemies would have spawned. Together with the emphasis on escort missions, it’s often hard to believe your failure is your own fault.

But the battles you get to participate in - dominate, really, with your prototype fighter locking onto dozens of enemies at a time and taking out capital ships with a single torpedo - are massive, colourful and exciting. Swarms of fighters leave spiralling vapour trails between massive spaceships that blast out colourful laser beams and arcing missiles. And you rocket through the whole mess blowing things up left, right and centre. Project Sylpheed looks like the battles I imagined I was taking part in when I played Wing Commander, way back in the day.

The sheer cool factor inspired me to rise to the challenge of these tightly timed escort missions, learning to prioritise targets and dispatch them quickly. And, well, I had fun. I got a real sense of achievement from completing these uncompromising missions, earning points to spend on customising my fighter with huge and even more explodey weapons. And when I did finally reach that last ham-fisted cut scene, I couldn't help but view it with some strange fondness.

Project Sylpheed may be a quirky game with a number of significant flaws, but as the space sim genre is on the cusp of a Kickstarter-funded renaissance, it’s also a solid example of what a modern spaceship game can look like.

Disclaimer: I played the game on normal difficulty, with no DLC weapons and without skipping any missions.
Posted by Pacian at 11:58 pm No comments: