Gun Mute: Version 6
Version 6 of Gun Mute fixes a few bugs that you hopefully never saw, but that might have been a bit jarring if you did.

The new files are in the same place as the old ones:

-Windows executable - a zip file containing a simple double-click-to-run file for Windows.
-.t3 file -a file that can be run with interpreters for Windows, Mac and Linux.

And because that's not especially interesting, here's a little something... extra.

It took twelve A4 pages to design Gun Mute. Here are the four most interesting ones. 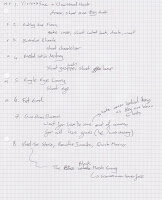 This was my first attempt at putting names to puzzles. In the next such document, the cast was pretty much finalised, but there are a few differences in this one. (Warning: puzzle spoilers!) 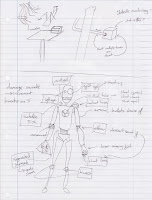 Atomic April was originally a lot more complicated than she is now. I had trouble making this puzzle hang together until I decided to give her a 'transparent brain jar'. Now she's one of my favourite characters.  If you can make any sense of the diagram above, you're doing better than me.

I wrote out the Sheriff's speech in one go, during a bout of insomnia. My handwriting is much neater at one in the morning it seems. (Warning: plot spoilers!) 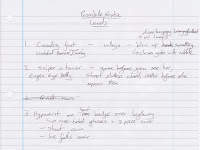 Towards the end of development, I suddenly became worried that the game was too short, and quickly cooked up three extra characters who never made it into the game. The hypnotist would have been called Mesmer the Amazing.

Obviously, you can find additional design notes on this blog, in my Gun Mute category. 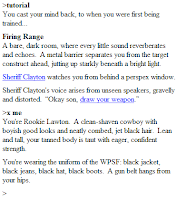 This tutorial sequence was completed but never fully fleshed out. Ultimately I decided that it was completely unnecessary and only likely to interrupt the game's urgent flow towards noon. (Warning: plot spoilers!)

The game was originally going to end with Mute and Elias riding away on a robot horse, with Juanita tagging along if you had de-programmed her. As I worked on the game, though, it became increasingly more difficult to come up with a good reason why they'd leave town after systematically killing everyone who might cause them trouble, especially after I started adding more friendly and ambiguous characters. Eventually I came up with the ending that the game currently has, which nevertheless went through two or three iterations.

It really is worth pointing and waving around friendly characters, especially after you've relieved their burdens. I did my best to implement responses to pointing at pretty much every object around them.  Most of it is just small talk, but there are a few mentions of bigger things. It is possible, for example, to get Elias to mention Robo-City Alpha.

I did start work on a little extra that was going to be included with the game: a tourist pamphlet for the Radiation Plains, trying to appeal to the inhabitants of 'Robo-City Alpha'. It started with a foreword by Sheriff Clayton, talking about his efforts to make the area safe, and then featured three testimonials by happy tourists, including a robot drone looking to relax among the meat bags, a once-human intelligence from the Atmospheric Networks (as mentioned by the plainswoman) who enjoyed reminding herself of the misery of physical form, and a third perspective that I can't actually remember. All this was interspersed with little boxes dispelling common myths about the plains, such as the likelihood of turning into a mutant zomboid.

The chief issue with this document was formatting: I just lumped it all into a crappy html file, and I didn't really have the confidence in it to spend time getting it into shape. The Radiation Plains tourist brochure may now be lost for all time, as I don't seem to have backed it up from my old - now deceased - computer. I wouldn't worry too much, though - it really was a bit rubbish.

Well, that's pretty much everything I can think of that might interest you. Please stop playing Gun Mute so that I won't have to fix anymore bugs.
Posted by Pacian at 10:32 pm

You can't fail in making my day better... Thanks. Really.

Actually - if I may be so bold - I think you could have released it with the tutorial level without disrupting the story's flow, by going the way Deus Ex 1 did.

If you have played that game, you may remember that it put the actual main game and the training level as separate things, which was quite a clever idea (and the training level, like in your game, revealed information about the characters involved, but still, it was optional). That is to make it accessible, but at the same time, put it out of the way for those who want to play the game proper.

So *theoretically*, you could have made a menu of sorts at the beginning of Gun Mute, something along the lines of:

Yeah, I realize that this is obsolete now, but... just saying. In case you ever want to return to GM. It was a cute game :D