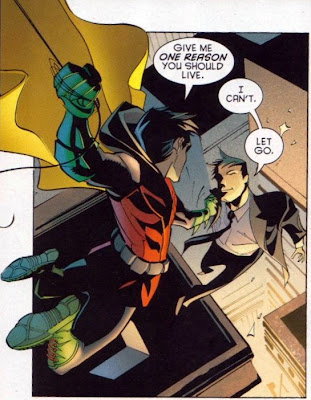 Batman's dangerous foe Hush has now assumed the likeness of the deceased Bruce Wayne, and even when Catwoman and the new Batman and Robin apprehend him, his complex schemes continue. Meanwhile, a brutal new vigilante stalks the streets, the pyromaniacal Firefly is implanting incendiary devices in the unsuspecting citizens of Gotham, and self-mutilating serial killer Zasz is planning something so horrific, a key member of the underworld resolves to rat him out.

If that sounds like the set-up for a stirring superhero yarn, let me get to my chief problem with this book: I just described everything that happens in it. It's not that they ran out of space, the book's really thin. It's just that all we get are a few disparate beginnings all but one of which go nowhere, and then you've turned the last page. Dustin Nguyen's art is as lovely as ever, but even he disappointed me a little, toning down the prettiness of his Bruce Wayne (or Hush, in this case) in favour of a more typically beefy depiction. Boo-urns.
Posted by Pacian at 7:29 pm

This is totally irrelevant but there's a mention of Gun Mute in 'Creating Interactive Fiction with Inform 7'. Isn't that lovely?

Lovely indeed! Just a quote, though, if I'm right?

So far yes, but it really is not as if Mr. Reed mentions too many games... Also, it's a lovely book you'd probably have no use for.