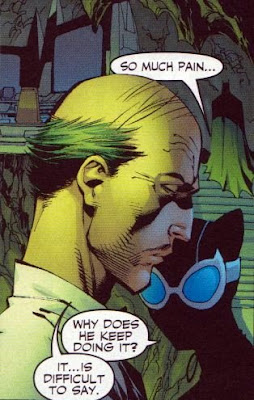 So here I am again for the second half of this superhero spectacle, and things are carrying on pretty much as they were before: still cramming in every notable figure in the Gotham City underworld, at breakneck pace, as part of an intricate plot that isn't nearly as carefully constructed as it seems to think it is.

The romantic aspect between Batman and Catwoman does show a little more chemistry here - I can't help but think that more tension could have been wrangled out of the way Selina Kyle has fallen for Batman while remaining disdainful of Bruce Wayne, but this book is more about being a notable collection of characters than any kind of love story. Huntress is back briefly in this volume, although there's no real resolution for her, and Oracle also (yay!) finally puts in an appearance as something other than a voice in everyone's ear.

My first impressions of Hush have pretty much held. If, like me, you've enjoyed Batman stories in other media and like the idea of having a Batman comic on your shelf - perhaps one which includes every hero and villain from Nightwing to Harley Quinn - then this is a pretty good choice. Lee's artwork is bold and full of motion, while Loeb's script does an admirable job of providing a handy primer on the state of Gotham City as it was in 2004, even if it's not quite the dashing mystery thriller he's shooting for.
Posted by Pacian at 9:09 pm